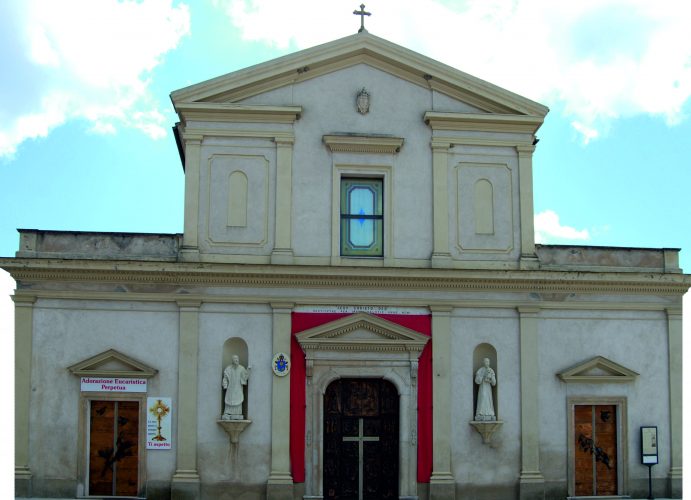 Between the end of XIV century and all long the following one, Tursi had a deep economic and demographic growth, that made possible to claim the final translation inside the town of the Bishop’s chair, belonging to the nearby town of Anglona, almost depopulated.

This choice of the Cathedral feed the never ending rivalry between the Rabatana inhabitants, linked with the Church of Santa Maria Maggiore, and the rest of the city, that sided with the Church of San Michele. On August the 8th 1545, with the Bull of Pope Paul III,l the Church of San Michele was (re)elevated to the Cathedral of the Diocese of Anglona-Tursi. The discontent of Rabatanesi and the concrete need for a new urban reorganization toward the valley made the conditions for a new movement. The chosen one was an existing Church, probably dating back to 14th century and dedicated to the Virgin of Annunciation, which was elevated to Cathedral on March 26th 1546.

The Cathedral is characterized by a Latin-cross basilical structure with three naves, a transept with a rectangular apse flanked on the left by the Cappellone of the Sacred Heart, on the right by the sacristy. The main façade has three entrance doors. In November 1988, two terrible fires a few days apart completely destroyed the Cathedral of Tursi, leaving only the perimeter walls of the building. Centuries of history, works of art and relics of Saints were destroyed forever, causing a commotion in the entire Diocesan Community and an immeasurable pain that, years later, is still alive.

The Church preserved valuable paintings, including one of huge dimensions dating back to the 18th Century, located at the center of the ceiling of the central nave, which depicted the Annunciation; on the sides of the high altar, two canvases painted in 1747 by the Neapolitan De Angelis, represented the “Marriage of Canaa” and “The multiplication of the loaves”; at the end, to adorn the entire Church, 12 ovals created around 1725 by Master Salvatore Donati from Roccella.

The confessionals 0f 1856 were destroyed, a wooden crucifix from the 16th Century, a majestic wooden pulpit suspended on the last right pillar of the central nave, the precious 16th Century pipe organ, the valuable wooden choir dated 1603.

In the vast sacristy, the large 18th Century closets were destroyed, they housed the sacred furnishings and the historical archive, as well as the relics of St. Vitale, a Greek-Bysantine monk who lived in these districts around the  10th Century and some precious paintings. Worthy of mention is a canvas in the center of the roof by Ludovico De Maio (1746), depicting the martyrdom of St, Matthew the Evangelist, “The Resurrection of Lazarus” of the 17th Century and a painting from the tursitano painter Francesco Oliva, representing the Virgin Mary.

During the restoration of the Cathedral, two fescoes representing St. Anthony of Padua and St. Margareth dated 1525 were found on the left of the high altar.

The fury of fire spared two stone slabs depicting the Annunciation and the Arcangel Gabriel (1519) and the baptismal stone font dated 1574.

The building was definitivel reopened for worship on May the first 2006; the restorations have reproposed the original style as faithfully as possible. In the last decade the church has been embellished by some works of  Master Vincenzo D'Acunzo who, commissioned by the same diocese, made some paintings depicting the four evangelists, "The Coronation of the Blessed Virgin" and the polyptych "The Baptism of Jesus". 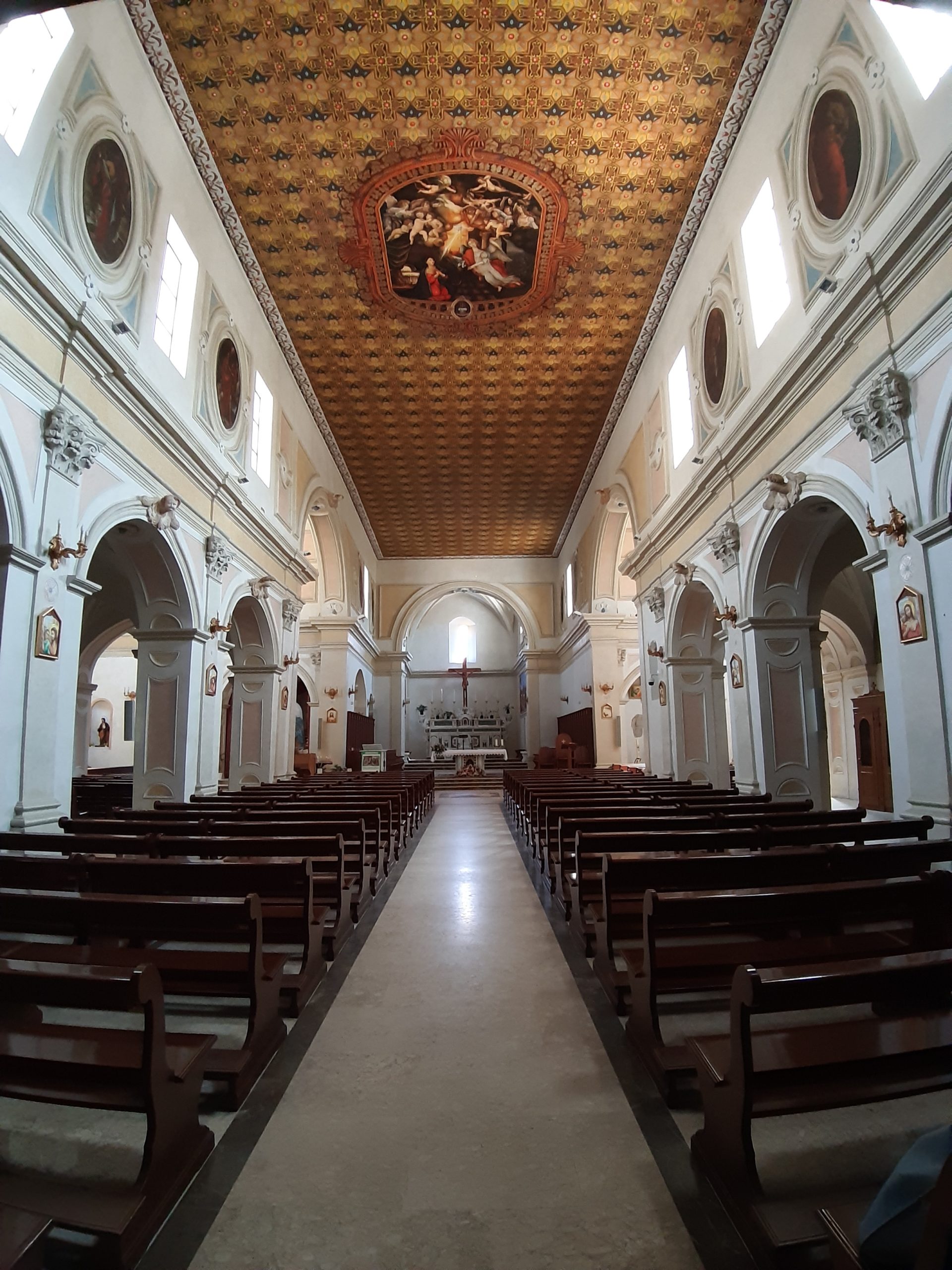 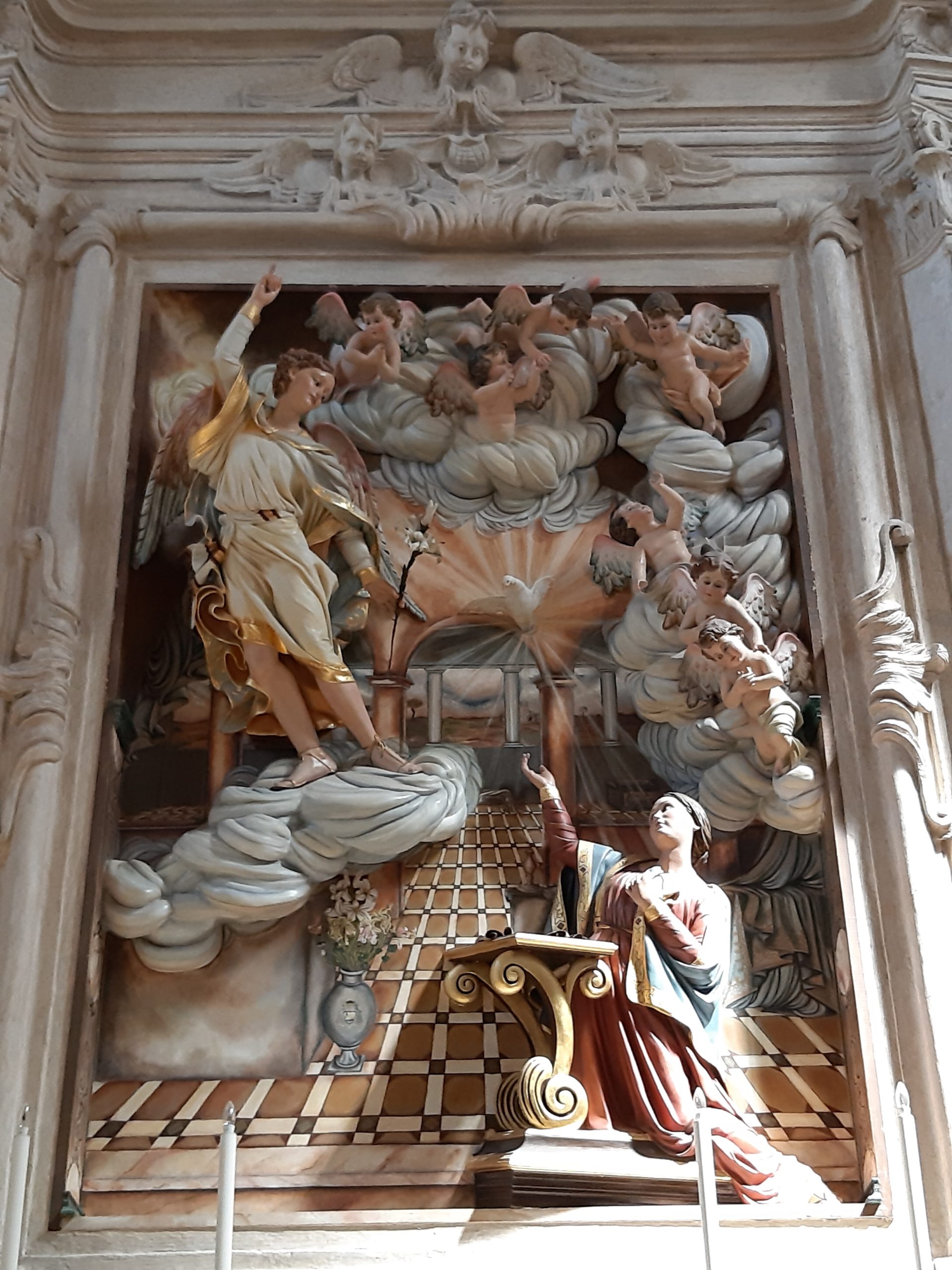 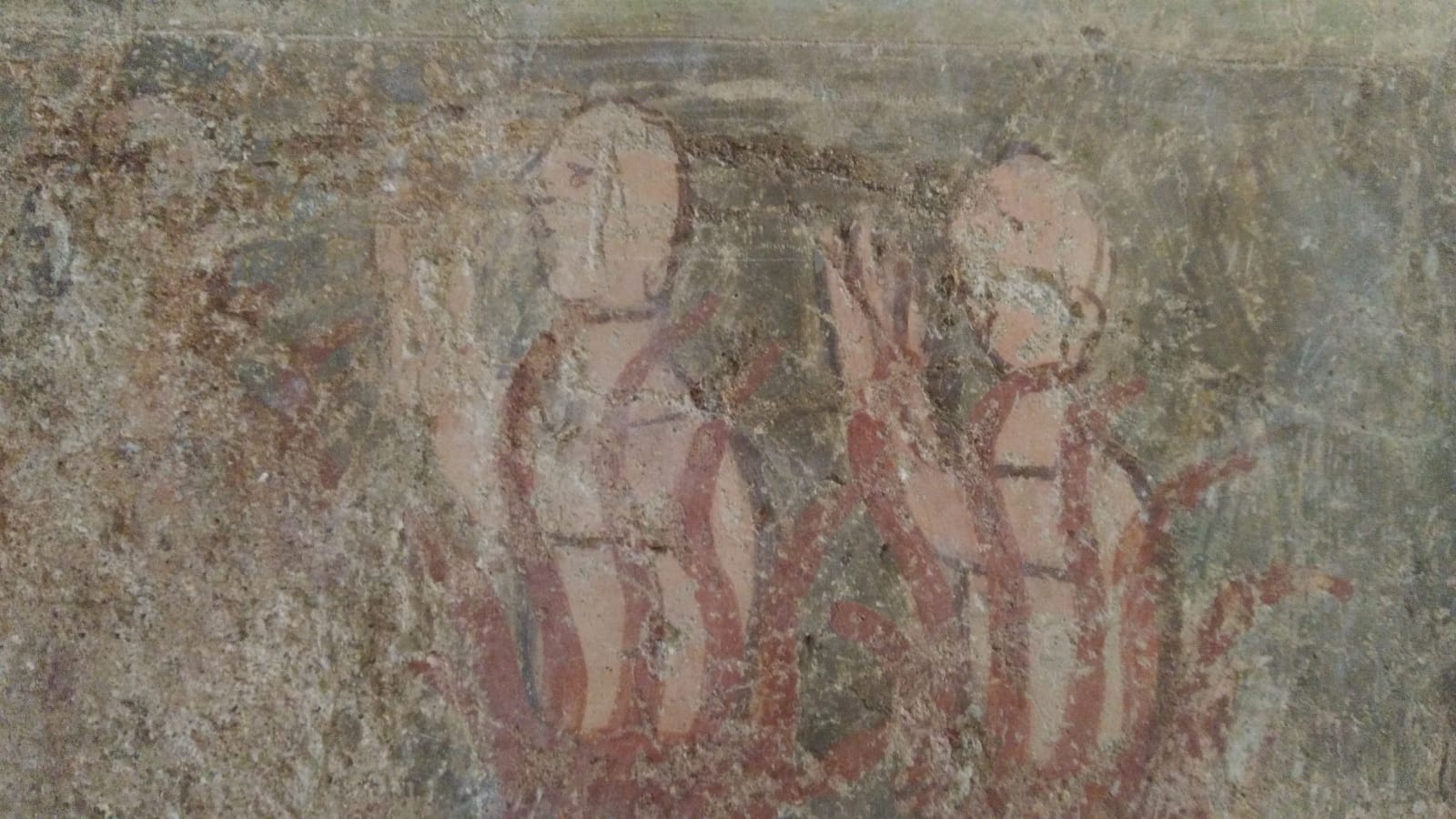 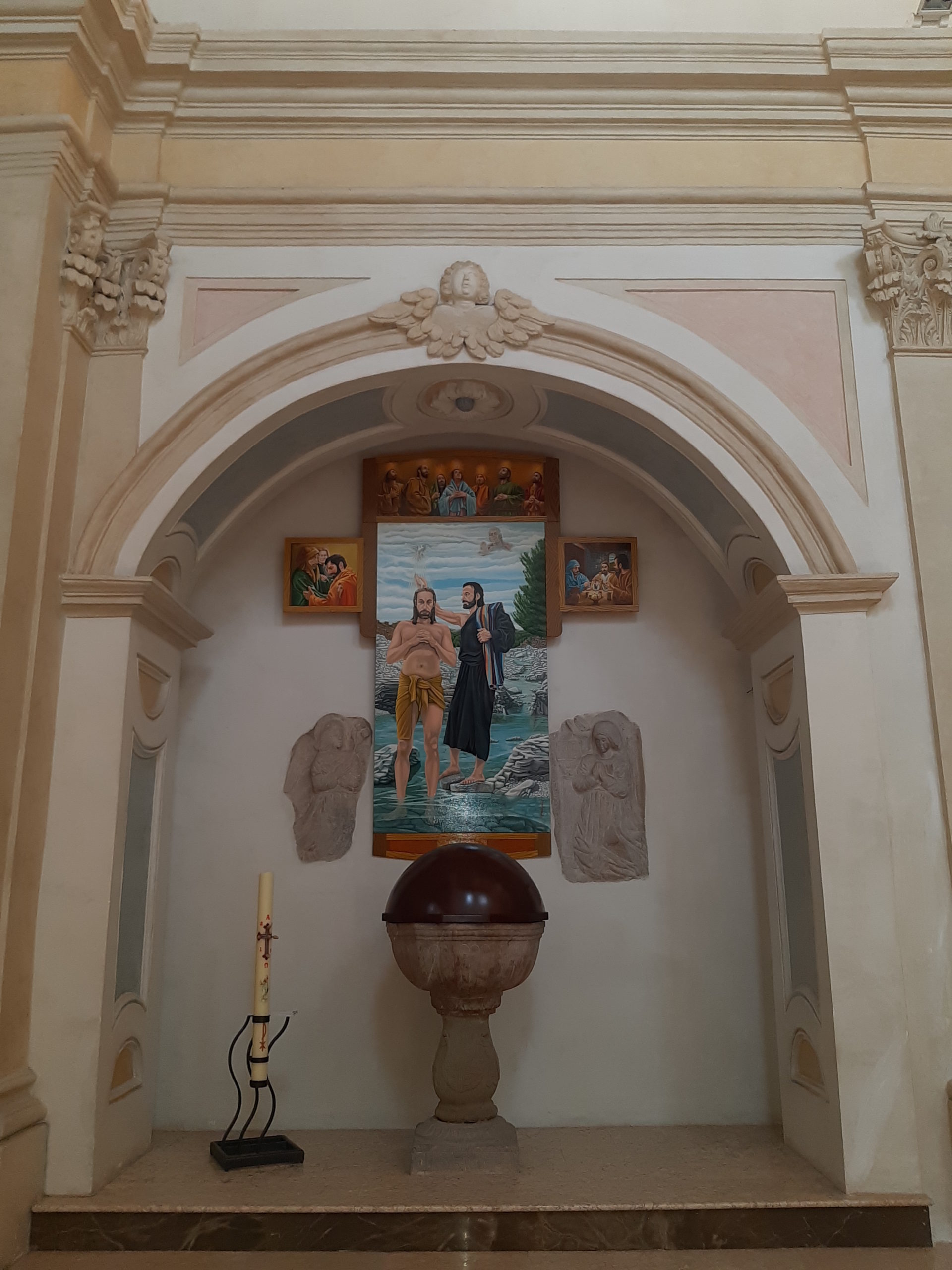 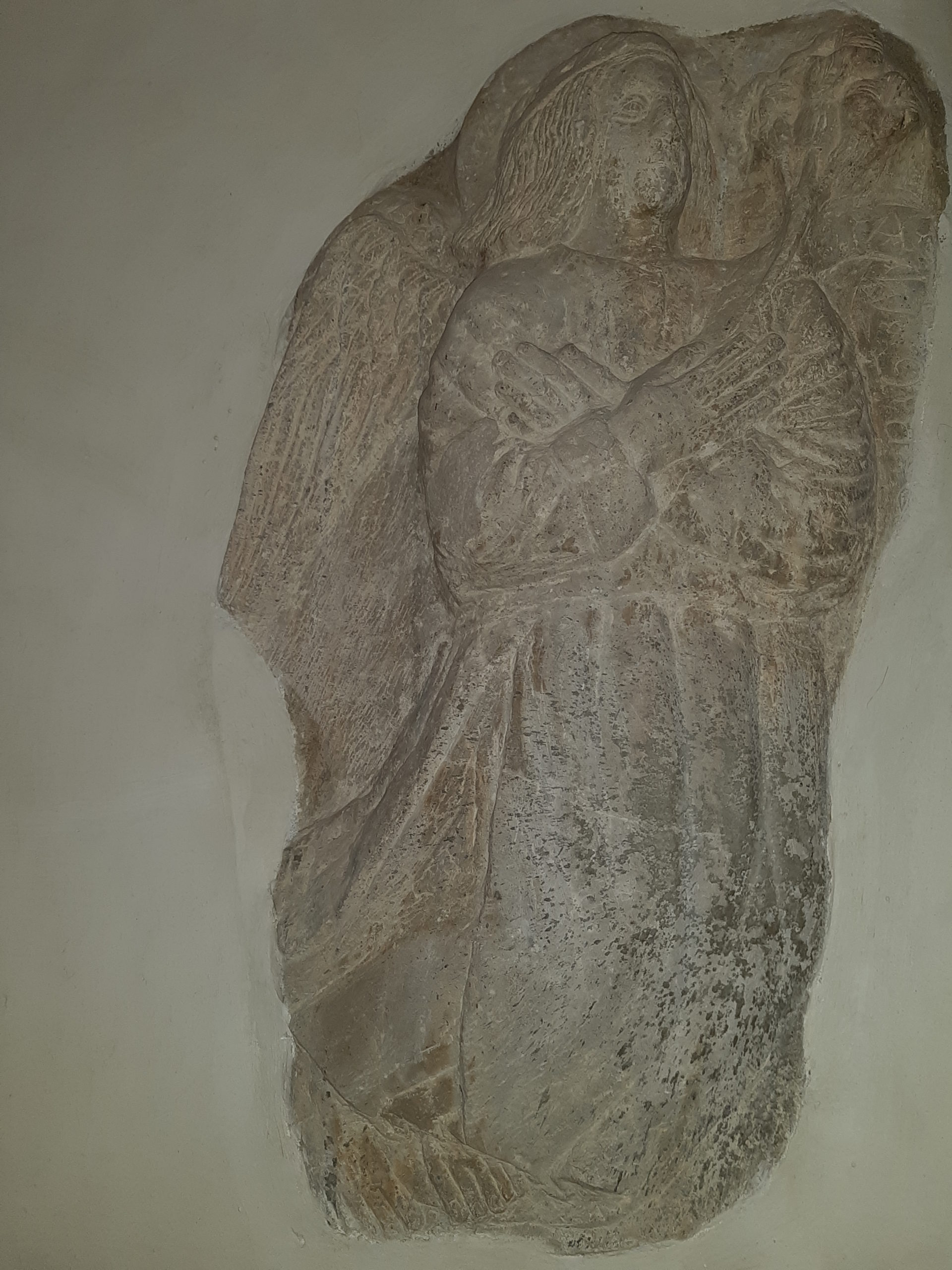 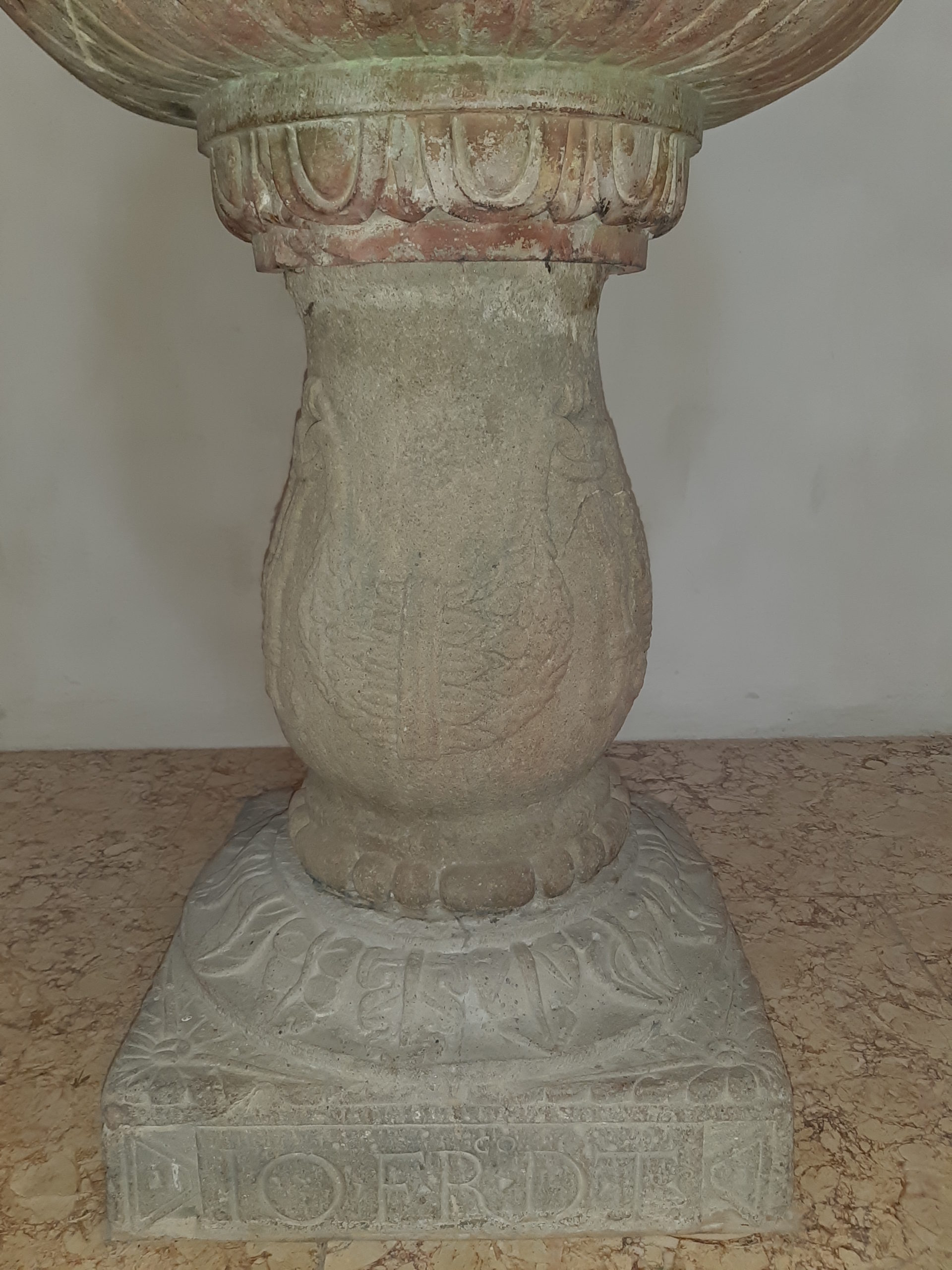 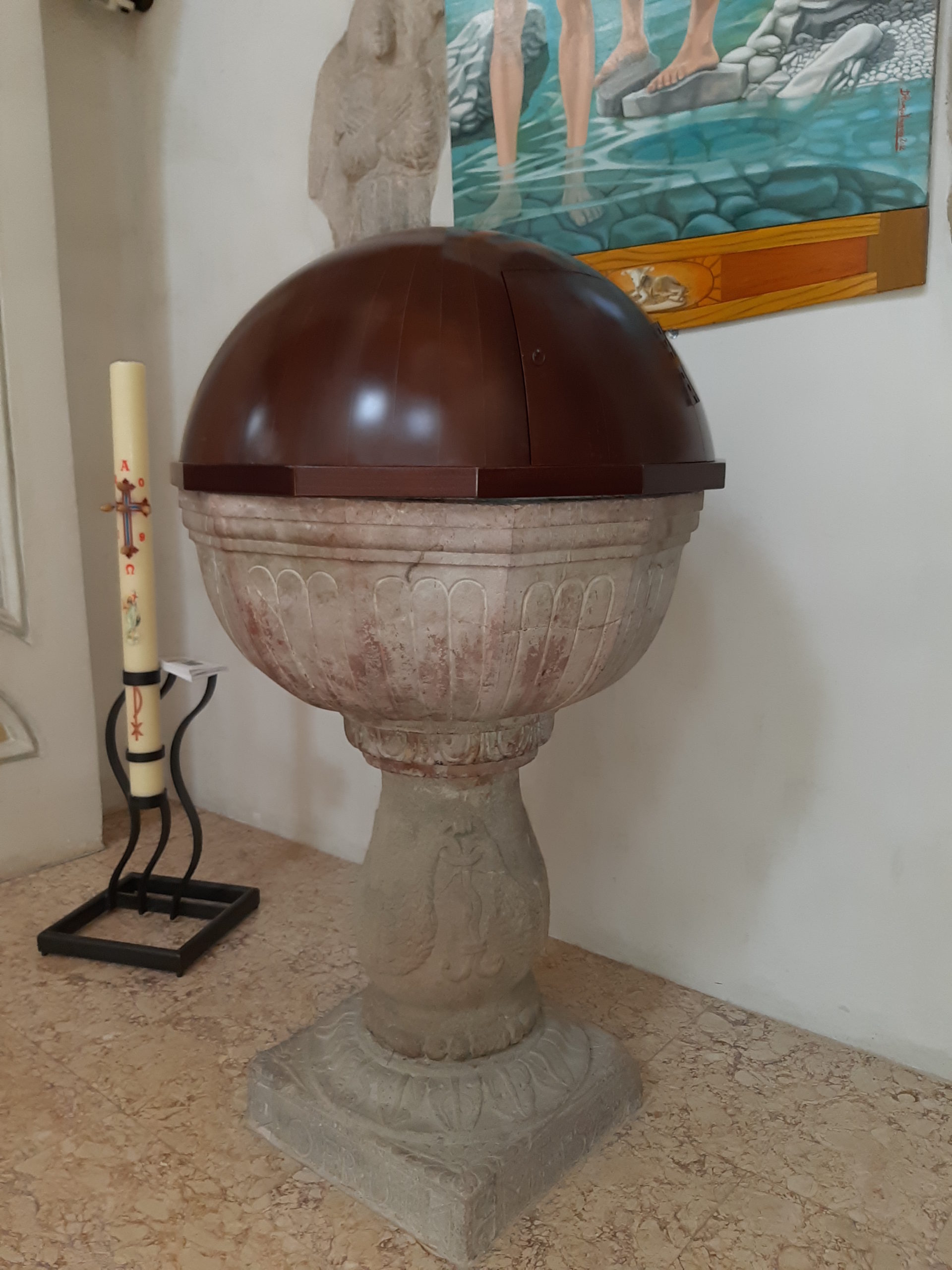 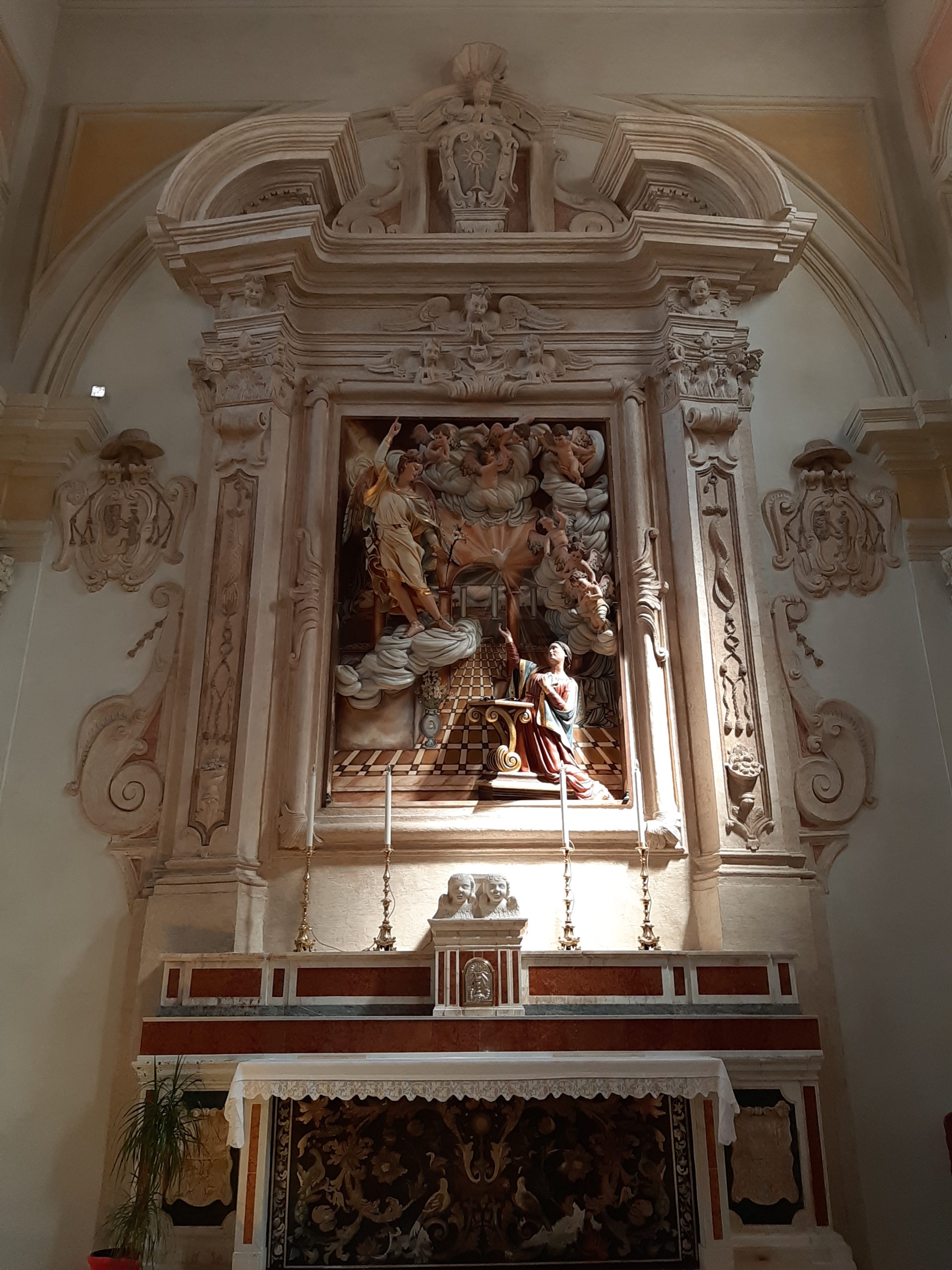 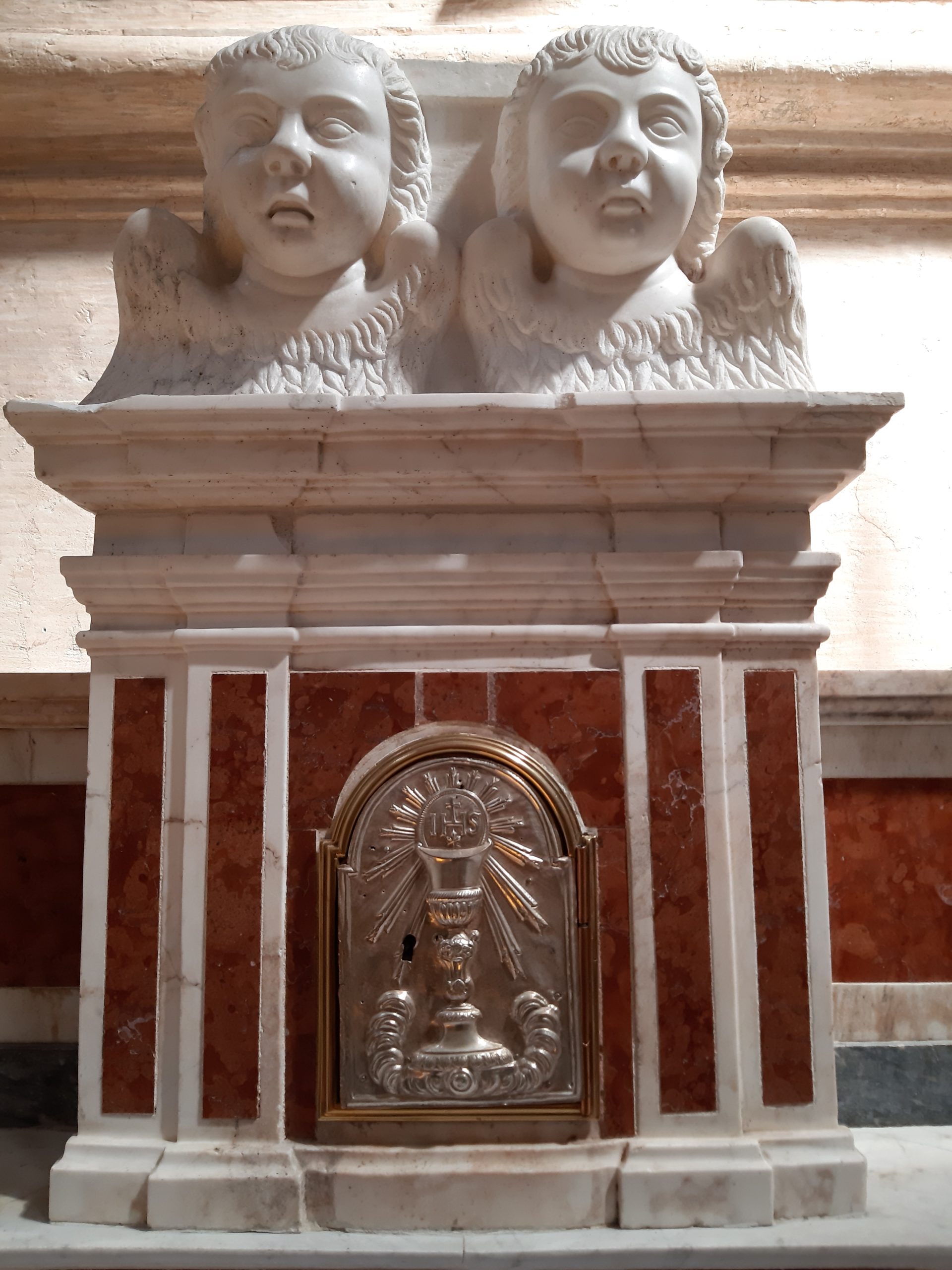 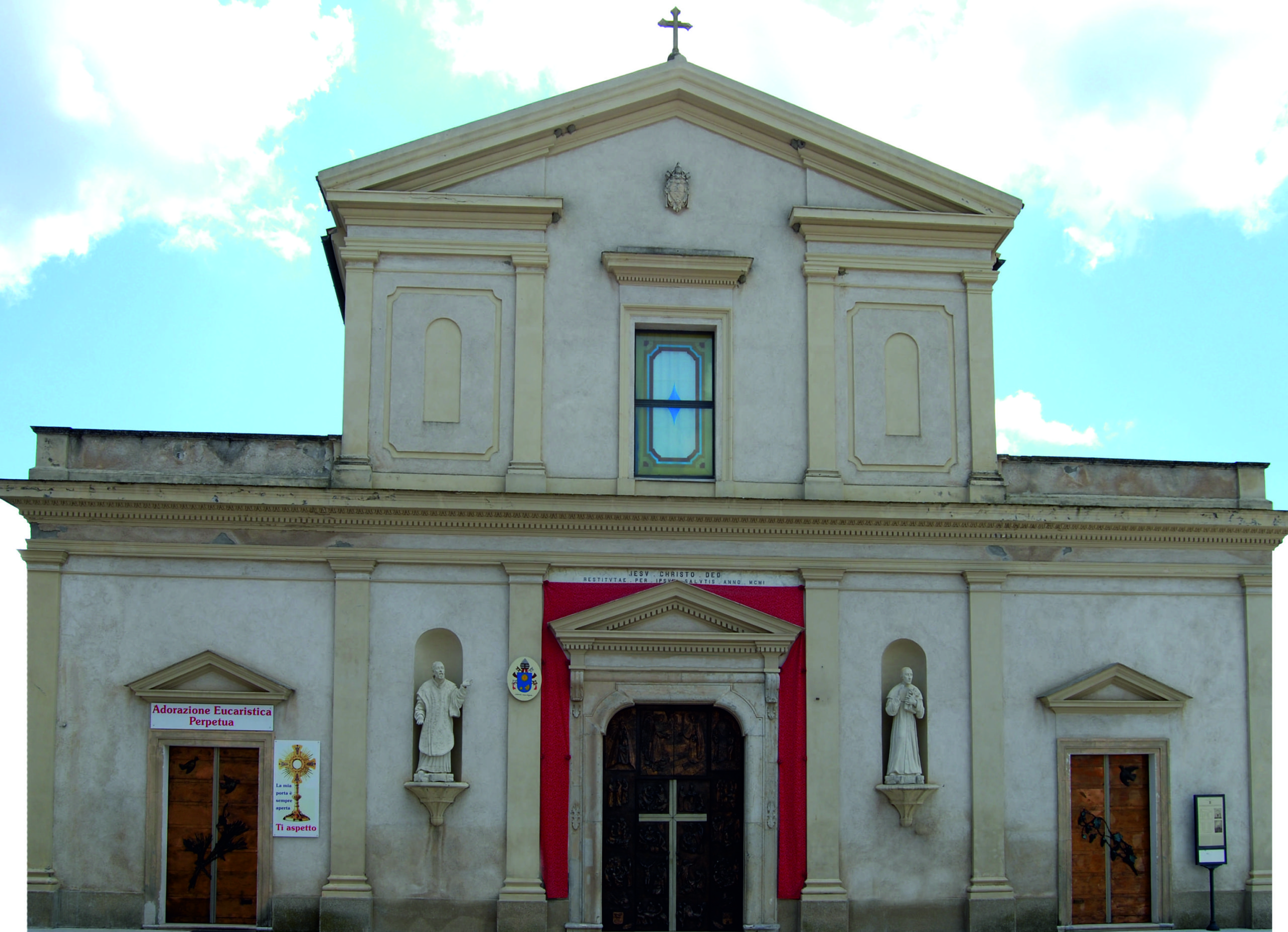